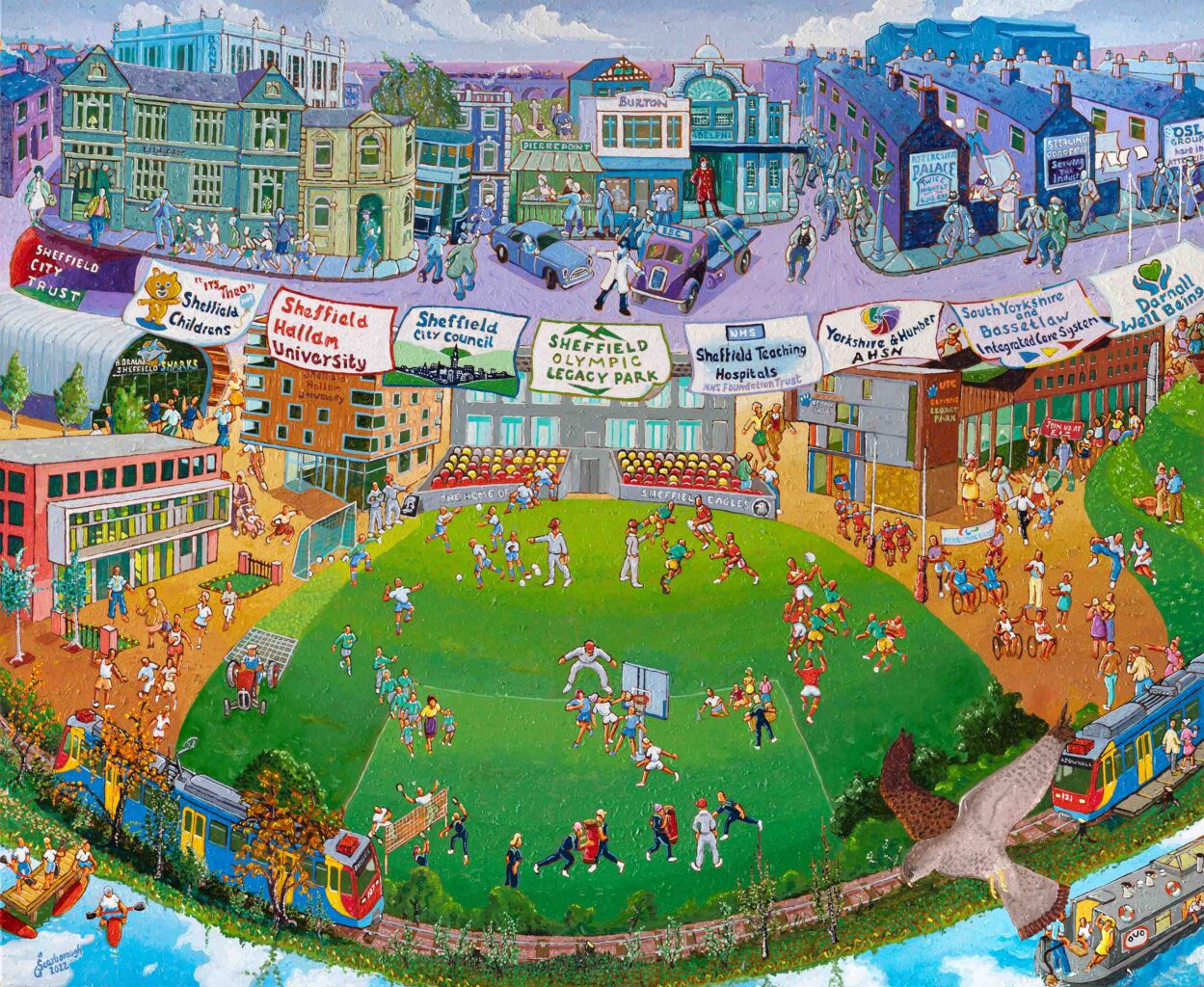 Joe was commissioned to produce a major piece to mark the completion of the first development phase at the Park, which has attracted over £100m in public and private sector investment.

He has captured a moment in time reflecting the old Attercliffe while celebrating the future that is being created through the transformational economic, health, sporting, and environmental legacies being driven by and delivered at Sheffield Olympic Legacy Park.

Set up after the London 2012 Olympic and Paralympic Games to deliver whole population improvements in health and wellbeing, it is the only Legacy Park outside an Olympic host city anywhere in the world.

The unveiling of the artwork is part of a year of celebrations for the 10th anniversary of London 2012 and Sheffield’s role as the leading legacy project outside the host city.

Tony Blair was Prime Minister in 2005 and supported the bid to bring the Games to London, stating the unique selling point was the legacy that would be created from the event. Boris Johnson was Mayor of London in 2012 and a big advocate of the Olympics providing a once-in-a-lifetime opportunity to increase sports participation and improve access to facilities.

They have been sent signed prints of the painting and invited to a planned ‘Olympic Legacy in Action’ gala dinner taking place at the English Institute of Sport Sheffield on 9 September with guests including a host of well-known sporting names from the last decade.

The event will celebrate Sheffield’s contribution to the Olympics and Paralympics, and the sporting legacy of the 2012 Games being created in the city.

Legacy Park Ltd Chair and former Sports Minister, Richard Caborn, who was a key figure in bringing the Olympic Games to London in 2012, said: ” Joe Scarborough has brilliantly captured the old Attercliffe and the new, and the role that the 2012 Olympics and Paralympics has played in the development of Sheffield Olympic Legacy Park.

“That’s why I’m really pleased to be able to send a copy of the painting to Tony Blair, Prime Minister at the time we won the Olympic bid, to show him what the Olympic legacy has delivered and achieved.

“We will also be sending a copy to the current Prime Minister, who was Mayor of London in 2012. Hopefully this will hang on his wall in Downing Street as a shining example of how the legacy of London 2012 has contributed to the levelling up agenda.”

Joe’s painting was unveiled at a special event at Attercliffe Old Library. The piece was initially meant to be 30 inches x 24 inches but has doubled in size due to the amount of detail. This includes the image of a concierge outside the Adelphi, which is modelled on Joe – the first time the artist has included himself in one of his paintings.

Originally hailing from Pitsmoor, Joe still lives in his hometown on his much-loved narrowboat where he started this latest painting.

He said: “It was quite an adventure creating this painting. It is 5ft x 6ft so did not fit on my boat, so we had to raise the roof slightly to get it in and obviously do the same thing to get it out.

“The painting was attempted from the view of a play in two acts. The first act is old Attercliffe and the second act and indeed finale is a celebration of today and acts as a portent of the future, as well as an investment in the future.”

Guests at the unveiling included previous Legacy Park Ltd Chief Executive David Hobson, and members of key organisations associated with the Park who joined together to commission the painting.

A personalised, signed artist proof of the work was presented to each of the commissioners and to David in recognition of his contribution to the Park’s development.

One hundred limited edition prints will be available to purchase at https://joescarboroughart.co.uk.

The original painting will initially be hosted at the Advanced Wellbeing Research Centre and, in the future, will move around Sheffield Olympic Legacy Park to different venues.